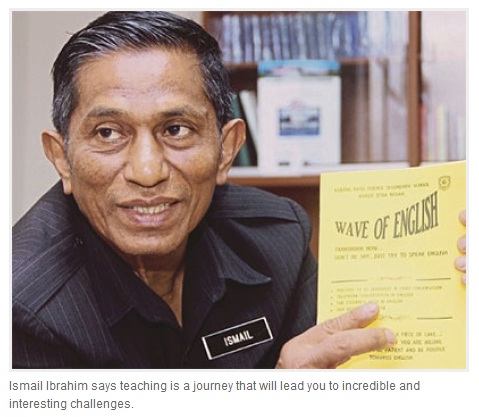 "Wave of English" was Ismail's brainchild to encourage the study of English in students.

He came up with the Wave of English booklet, which contained 50 English sentences used in daily conversations, telephone conversations, students' oath and doa recitals.

The initiative, which was introduced during his service at SMK Tengku Bendahara in 2001, became an instant hit and helped thousands of students to improve their English.

"The programme is not only aimed at boosting students' English competency, but also to improve their general knowledge," said the 59-year-old Langkawi-born educationist.

Even a decade after he had introduced the module, Ismail maintained his enthusiasm of the language and makes phone calls to his students to ensure that they practise telephone conversation sentences in the booklet.

However, not many knew that the father of five, who has been teaching Bahasa Melayu and History throughout his 35 years of teaching career, had never taken English seriously during his school days.

"Believe it or not, I never passed English during my secondary school days" said the Universiti Malaya Education Faculty graduate, who majored in Bahasa Melayu and History.

It was when he started teaching at SMK Bandin Tuaran, Sabah, in 1975, that he developed an interest in the language.

His affection for English grew stronger when he was promoted as the principal of SMK Tengku Bendahara, where he came up with the idea to introduce the module.

To prove his determination to improve his grasp of the language, Ismail signed up for an English language class in a tuition centre a month after his promotion as principal.

"Just imagine a 48-year-old man sitting in the middle of a tuition class packed with secondary school students.

"But I was not ashamed about it because I subscribe to the principle that learning is a lifelong process," he said with a smile.

Having learnt from his experience, he was determined to make sure that his students understood the importance of English.

"I remind my students that they should not just learn English to pass examinations but to adopt it as their second language as it will be helpful when they enter the job market."

His dedication to education received recognition when he was nominated as one of the finalists for the Excellence Principal Award in conjunction with the national-level Teachers Day celebration on May 16.

After spending more than three decades in the profession, Ismail said teaching was not just a job.

"Teaching is part of your life. It is beyond teaching in the classroom. It is a journey that will lead you to incredible and interesting challenges."

Ismail said to be an excellent teacher, one needed to have a passion.

"Teaching is all about developing talents, motivating them to excel in education and becoming a well-balanced personality."

He added that teachers faced all sorts of hurdles in carrying out their duties but they must persevere to n bring out the best in them.

Ismail, who has one more year of service before bidding farewell to the profession, supports the Malaysia Education Blueprint 2013-2025 (MEB).

"The blueprint is aimed at producing a generation of Malaysians who are knowledgeable, with good leadership qualities, multi-lingual and have strong moral and religious values, qualities that will enable them to compete at the global level." Additional reporting by Zahratulhayat Mat Arif 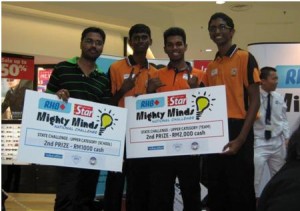